The contest is unique, because it is one of the only beard contests open to all genders to take part and build their own beards out of creative and strange materials. Both men and women compete in the Fantasy Beard categories; and all you need to do is show up with hair on your face regardless of your sex or gender to qualify to enter.

Steven Trypuc of Okeechobee, Florida drove himself over 5 hours to General Horseplay, the saloon shrine to comedian Bill Murray; and measured in with a over 12 inch long white Santa Claus Beard to win the largest prize; Best in Show and was crowned the 2022 Fantasy Fest Champine. Elle Taylor, the local LGBT icon; was crowned the first Whiskerina of Fantasy Fest. The proceeds benefited local charity Sister Season, raising a nice donation for their organization. Sister Season provides help to Key West hospitality workers in need.

“Having an awesome beard is better than having a fake girlfriend”, proclaimed winner Steven Mosher after winning a trophy for best natural beard. Mr. Mosher drove over an hour from Marathon, Florida where he tattoos at Doc’s Tattoo. After winning the trophy he shredded his shirt Incredible Hulk style and showed off bare chested revealing an impressive fully tattooed torso of traditional sailor tattoos. “We have big plans for next year”; says Ron Wolek the contest organizer, “like including more interactive online features. The contest is to inspire all genders to embrace something that men only could do; wear hair on their face, and grow an event where all genders can enter for fun and creatively.”

Gary Ek, host of Key West’s Barefoot Radio 104.9 remarked on his Saturday evening show about winning the contest for Natural Fantasy Beards with his online entry and added how the Fantasy Fest’s new contest fits in perfect with the island’s mantras. “There is a saying coined in Key West,” Mr. Ek said live on the airwaves November 5th, “if you spend more time caring for your beard than your liver; then you are on the right island.”. “I’m a winner!” screamed Elle Taylor after being proclaimed the first Whiskerina of Key West and all genders were indeed winners that Monday afternoon.

Winners from all categories were announced as follows:

The Judges Award went unanimously to an unknown Vietnam veteran who walked into the contest desperado style after the judging had begun and stunned the audience with a bizarre natural beard creation of 4 perfectly formed balls hanging from his whiskers all made of his own facial hair and a long twisted Dali style mustache. The judges awarded the veteran with their honorary trophy for his follicle achievement and he left without leaving his name or address.

If anyone knows of this hero’s whereabouts please contact beardchampionship@gmail.com so that the Wolek’s Famous Beard Championship administration can send him his certificate certifying him as a champion.

“I have been growing my Fu Manchu since nineteen eighty five and it goes down to my knees”; the veteran is quoted explaining to the judges and the artistic feat reached in his whisker styling deserves world wide recognition for this accomplishment of perfect circumference by record keepers and the world beard organization.

The championship was held adhering to National Beard and Mustache Association’s strict standards for competitions; certifying all recipients with trophies as recognized title holders amongst world wide Beard Competitors.

After the contest, all competitors were entered into an online competition with online competitors where the public was allowed to vote for their favorite beard or mustache by liking their photo on the @beardchampionship instagram page. Carleton Spears of Port Arkansas, TX was announced the People’s Choice champion on November 1st, 2022 to celebrate the first day of Movember; the annual kick off to world wide prostate cancer fundraising.

Fantasy Fest is an annual creative costume festival that began in 1979 and has grown to a yearly event that attracts over 70,000 revelers to the island city of Key West, FL; growing to becoming the second largest mardi gras style festival in the country. Wolek’s Famous Beard Championship is an officially sanctioned Fantasy Fest event for two years running as a Life of the Party Sponsor. The inaugural 2021 event was held at Hard Rock Cafe Key West during “All Dazed for a Holidaze” and this year’s event was held at General Horseplay during “Cartoon Caos and Cult Classics”.

General Horseplay the host of the 2022 contest is located at 423 Caroline Street in Key West, FL on the corner of Duval Street in the center of Fantasy Fest. General Horseplay is operated by The CHIVE. John, a Chive Contributor explained the bars homage to Bill Murray; “A while back I remember Bill Murray sprained his wrist *sick at a golf tournament. When I asked him what happened he replied, “general horseplay”. I remember thinking it was a classic way for Bill to describe how he got injured. Of course he said it was just general horseplay. I passed the gem onto Chris and the TBD brick building finally got a name.”

The signature cocktail is “The Murricane” and the bar is decorated with hidden pictures of Bill Murray everywhere. The emcee for the Monday afternoons proceedings at General Horseplay was popular Key West local celebrity Elle Taylor. The contest Registra was Yuri Conception and registration started at 12:00 noon and closed at 4:00pm when judging began. All entry fees were sister to the charity organization Sister Season. Ms. Conception also served as the contest score keeper.

Judging was performed by Captain Ron Wolek; Hollywood makeup artist with credits such as Walking Dead, Stranger Things, and Disneyland and also a multiple time Canadian beard contest champion. Ron Wolek runs and operates the largest fake mustache store in the world at mustacheparlor.com and is a sought after Fantasy Fest body painter, known as his Fantasy Fest persona Captain Ron Wolek.

Ron Wolek was born in Syracuse, NY and grew up in Kissimmee, FL and is a third generation wig and makeup artist. His mother was legendary Disney World designer Janet Wolek. He lived in Los Angeles before returning to Kissimmee, FL during the pandemic. Andre Amador; the General Manager of General Horseplay and Sue Schaeffer; Florida Grand Opera wig designer also served on the Judging Jury.

Score cards were provided by the National Beard and Mustache Association and the contest was held according to the national standards for beard competitions. Ron Wolek will be competing November 12th during the National Beard and Mustache Championship held this year in Casper, Wyoming. Wolek’s Famous Beard Championship will hold the third official festival sanctioned event; the Fantasy Fest Beard Contest on Monday October 23rd at a yet time be determined location during Fantasy Fest 2023; which has been dubbed the year of “Uniforms & Unicorns”.

Our Staff Writing Team works hard to bring you great content and share news & events from the bear community and beyond.

Pawed NYC is heading to Portugal for Camp Bear Hug! 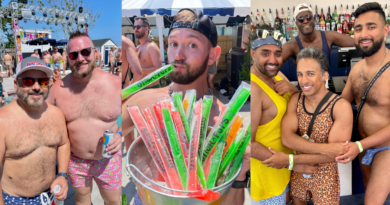